Elisa Cecilli, guest blogger in the FBK Magazine, made an interview with Eleonora Barbieri Masini, on the topic of "futures studies"

EC: When did you first start dealing with futures studies? What drew you to this discipline and why did you decide to study it further and make it the cornerstone of your career?

EBM: It was the ’70s, I started writing to all the people I could find who were dealing with this, from Bertrand de Jouvenel in Paris, to Robert Jungk In Austria, to Johann Galtung in Norway. They were among the first ones in Europe. Then I contacted the University of Manchester in the UK… Everyone responded with great enthusiasm since in Italy we were in the early stages. They invited me to the first major conference in Kyoto, where I met people dealing with futures studies in different countries. They were of course mainly Americans, and Germans in Europe, where Ossip Flechtheim had been.  He had launched the term futurologies, which is now no longer used. Also in Italian we make a mistake when we use the term futurology because it gives the feeling that there is “one single way to look to the future, but there are different ways to look to the futures.” For this reason, the term “futures studies” is used globally. In Spanish, they use “perspectivas” (perspectives), in French, founder Bertrand de Jouvenel uses “futuribles”, always in the plural.

The key point to remember is that one can never speak of the future, but of the futures, in the plural. The futures are always multifaceted, there is not a single future, because if we look at the past we see a number of possible changes that could have led to possible futures different among them.

EC: The use of the plural, as you said, implies different possible scenarios. So, speaking of futures studies in the plural, can you explain what they deal with in particular and which methodologies they use?

EBM: Speaking of futures in the plural gives you the chance to (pre-) dict different futures in a society that is changing as rapidly as technology and lifestyles. Several possible futures, because my decisions today can have different consequences. The most common method to carry out this kind of analysis is the description of the alternative scenarios; futures studies always require an analysis of the recent past, whatever the topic.
For example, elementary school in Italy needs an analysis of the recent past, you have to decide whether to examine up to 10, 20 years back. What has been changed? What decisions do we intend to make? And thus the forecast is used to compare alternative scenarios whereby those who have to decide can direct their orientation.
That is to say that, among the different possible futures, one can choose the most probable ones among them. One should always point them as possible or probable: this is a concept that one needs to keep clearly in mind I can never say “this is a certain future,” I  conduct future studies but I cannot be certain. The mistake is precisely that. And for this reason, in Italy many decisions have not been made. I assure you that myself and Aurelio Peccei, founder of the Rome club , have worked so hard and have tried to make politicians understand that in making decisions we have to look at the possible consequences of those decisions. The consequences are never one, they are several, and I have to try to identify them because the futures are always several, not one. I cannot say that I want to change the primary school in Italy in this direction for sure, I do it because I believe this is the most likely to be hoped for among the predictabile futures.
In England and Germany, these methodologies are extensively used to provide particular guidance in the fields of education and research for example. Northern Europe countries such as Sweden, Norway, Denmark and the Netherlands have ministries or research centers able to identify the possible consequences of policy decisions taken or to be taken, and they are also in the government.
Companies should also take advantage of it, for example, FCA has a study group. Large corporations should all consider it important to weigh the consequences of their actions today and be prepared for the effects of their choices.

EC: What is your take on the futures that we can imagine in the next 10 years?

EBM: “First of all climate change is undoubtedly a fundamental thing, water changes, water use and sources, for the future of the world.
Furthermore, with older people (at least in advanced countries), the relationship between young people and the elderly is one of the great social problems of the future.
Finally, a topic of utmost importance is the kind of education we should give young people for them to be ready for a world that is constantly changing and that will keep changing more and more. Already from primary school, we need to introduce evidence to put this concept into minds: look forward to not be taken by surprise, as past generations.
What are the future jobs, jobs that can be important to a changing society? Opportunities
Human brain and mind. The future of neuroscience in Trentino
READ MORE 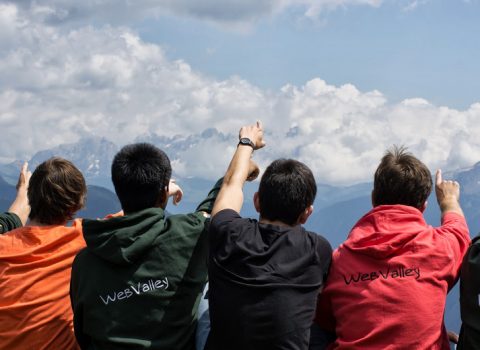