COVID-19 spread may have a dramatic impact in countries with vulnerable economies and limited availability of, and access to, healthcare resources and infrastructures. However, in sub-Saharan Africa, a low prevalence and mortality have been observed so far.

The study provides novel data on mixing patterns in rural Ethiopia and highlights the potential impact of COVID-19 epidemics in less urbanized regions of the country. The researchers provide estimates on the potential burden of COVID-19 in the SWSZ under the assumption of a mitigated, but not controlled epidemic.

They conclude that the overall Covid-19 burden might be generally lower in sub-Saharan Africa compared to high-income settings, thanks mainly to younger demographics. However, the observed demography and social contact patterns suggest that remote settlements may suffer the higher fraction of critical cases, possibly due to older population and high rates of intergenerational mixing. The FBK research group estimated that, at the end of an epidemic mitigated by school closure alone, 10-15% of the population residing in the SWSZ would have been symptomatic and 0.3-0.4% may experience critical disease (i.e. requiring mechanical ventilation and/or resulting in a fatal outcome).

Remote subsistence farming settlements are expected to suffer a higher overall burden of critical cases (~0.4% of the total population), due to a higher proportion of the elderly in the population, their higher number of daily contacts and intense intergenerational mixing.

Urban neighborhoods, where highest contact rates at younger ages were found, are expected to experience the highest attack rate of infections (~60%) and symptomatic cases (~13%).

School closure implemented in Ethiopia during the early pandemic phase contributed to reduce the reproduction number by ~50% and the attack rate of infections by ~30%.

It is possible that in SWSZ, many critical cases would result in a fatal outcome due to the lack of ICUs. The high prevalence of comorbidities (e.g., malnutrition, TB) and inequalities in the access to primary care represent additional vulnerabilities for African settings.

The study led by the Center for Health Emergencies of FBK was conducted in collaboration with the Doctors with Africa CUAMM, the Bocconi University and the Indiana University School of Public Health di Bloomington. 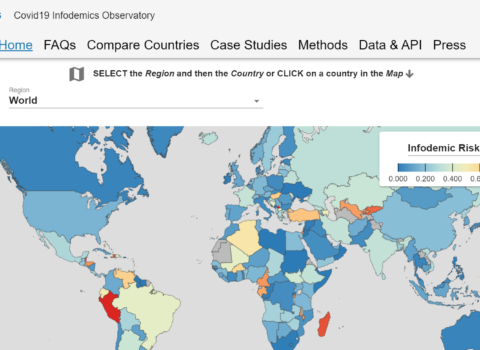