Hydrogen to store renewable energy: FBK in the HyCARE project

Storing large amounts of renewable energy in limited spaces using hydrogen as an energy carrier. This is the goal of HyCARE – Hydrogen CArrier for Renewable Energy Storage, a project funded with 2 million euros by the European Commission through the  FCH JU – Fuels Cells and Hydrogen Join Undertaking public-private platform.

Also, the consortium of European partners – research organizations and companies – that will work on the project, under the coordination of the University of Turin is a public-private partnership. The other institutions involved, in addition to FBK-ARES, are the French CNRS (National Center for Scientific Research), the Helmholtz Zentrum of Geesthacht, Germany, and the Norwegian Institute for Energy.

The project aims to increase efficiency in the production and storage chain of renewable energy by approaching in an innovative way what today is the weakest link: storage. 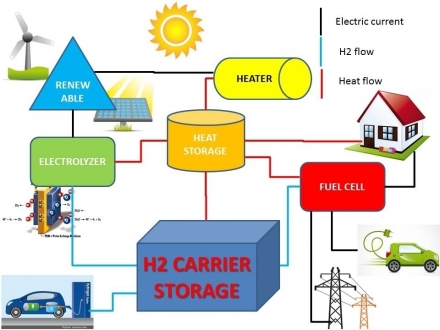 “HyCARE uses hydrogen as an energy carrier, but adds an element of innovation that will allow more energy to be stored in spaces much smaller than those needed today” – Luigi Crema, head of the FBK – ARES Unit explains. “Energy storage through hydrogen allows storing large amounts of energy compared to traditional batteries. However, it requires high-pressure cylinder containers, which entail high compression costs and the need for large spaces. HyCARE solves this problem thanks to an innovative solution: absorbing hydrogen in a metal powder at almost normal temperatures and pressures, drastically reducing the storage space required”.

The FBK Ares Unit will be strategically involved in different stages of the project, from the early stage of preliminary analysis to the dissemination and exploitation of the final results.

“With our skills, we will study the hydrogen storage system through multiscale and multiphysics analysis models – Matteo Testi, a researcher with the ARES unit, coordinator for hydrogen projects – adds. In particular, we will study thermal management, the integration of the various system components to enable their engineering, the development of hydrogen storage in the storage tank. Finally, we will define the control strategy of the whole system “.

The project – that officially kicked off a few days ago and will end in December 2021 – provides for the production of almost 5 tons of metal powder, which will be put in special containers. The thermal management of the plant will introduce an innovative approach, making use of phase change materials that will significantly increase the efficiency of the whole process. The amount of hydrogen stored will be 50 kg, the highest ever stored in Europe with this technique.