ENEA TECH: THE AGREEMENT WITH FBK FOR THE ENHANCEMENT OF TECHNOLOGICAL TRANSFER HAS KICKED OFF

Collaborating to identify possible synergies and development opportunities in research and tech transfer, to contribute to the growth and competitiveness of our country. This is the goal of the agreements signed by ENEA Tech with FBK, IIT, HT

After the signing of the agreement with CNR and its 88 research institutes, ENEA Tech, the foundation that manages the largest Italian fund for technology transfer set up by the Ministry of Economic Development with an endowment of 500 million euros, has signed three collaboration agreements, with Fondazione Bruno Kessler (FBK), Italian Institute of Technology (IIT), and Human Technopole (HT) respectively, with the aim of supporting technology transfer processes and thus contribute to the growth and competitiveness of our country. In line with the specific missions of the three organizations, the goal is to collaborate on projects for the transfer and enhancement of technologies and solutions developed within the three research centers.

ENEA Tech will work with each partner through joint work teams for the analysis and enhancement of technologies of common interest developed in the three research centers. Furthermore, collaborations and projects will be launched for entrepreneurial initiatives of interest for ENEA Tech, for the evaluation of potential investment or go-to-market opportunities. FBK, IIT, HT will also engage in technology due diligence and scientific support, for possible investments by ENEA Tech.

Furthermore, the collaboration will also concern the identification and possible enhancement of research activities in the Italian ecosystem in the Green, Energy and Circular Economy, Healthcare Technology, Deep Tech, Information Technology industries.

Anna Tampieri, president of ENEA Tech, said: “We are very proud to have signed these agreements with institutions of recognized Italian and international excellence and we are aware that knowledge is the real engine of society’s cultural, technological and economic development, we are sure we have the best travel companions in this enterprise aimed at economic recovery and the strengthening of the industrial chains of our country towards responsible and sustainable progress”.

Fondazione Bruno Kessler President Francesco Profumo commented: “The agreement with Enea Tech is of particular relevance for the Foundation, as FBK has a reputation of scientific and technological authoritativeness to contribute to this important effort with due diligence and scientific support for possible investments by Enea Tech in new business initiatives in the Green, Energy and Circular Economy, Healthcare Technology, Deep Tech, Information Technology industries. This is an activity that actually broadens our perimeter of operation, strengthening FBK’s position of excellence at national and international level“.

ENEA Tech
Private foundation supervised by the Ministry of Economic Development whose mission is to invest in innovative technologies of national strategic interest and on a global scale, through the Fund for technology transfer established at the Ministry of Economic Development, with an endowment of 500 million euros. Lean and independent organization built on the model of the large US federal agencies (Darpa, Barda) and new EU agencies (EIC). To ensure speed in technology transfer as well as action flexibility for the growth and competitiveness capacity of the country.
President Anna Tampieri, General Manager Salvo Mizzi. The Foundation’s Board of Administration members include, in addition to president and CEO Mizzi, ENEA president Federico Testa, while Angelo Miglietta is the president of the Board of Auditors.

Fondazione Bruno Kessler (FBK)
FBK, the result of a history spanning more than half a century and with over 30 years of experience in leading research in Artificial Intelligence, through 11 research centers, more than 400 researchers, aims at excellent results in science and technology with particular regard to interdisciplinary approaches and to the applicative dimension, operating as a science and technology hub.

Italian Institute of Technology (IIT)
Government-funded scientific research center that promotes technological development with the aim of supporting excellence in basic and applied research to promote the development of the national economic system. IIT’s research work is characterized by a strong multidisciplinarity and is engaged in four scientific areas: robotics, computational science, technologies for life science and nanomaterials. IIT’s production boasts 14500 publications, over 200 European projects and nearly 50 ERCs, over 1000 active patent titles, 24 established start-ups and more than 40 in the launch phase. In addition to the network consisting of 4 offices located throughout the Province of Genoa, IIT has 11 research centers throughout the country (in Turin, two in Milan, Trento, Rome, two in Pisa, Naples, Lecce, Ferrara and Venice) and 2 outstations abroad (MIT and Harvard in the USA).

Human Technopole is the new Italian research institute for life sciences, located in the heart of MIND (Milan Innovation District), the area of Milan that hosted Expo 2015. The campus will have 35,000 interdisciplinary laboratories, including three existing buildings, with Palazzo Italia among them, and a newly built one. Human Technopole’s mission is to improve people’s health and well-being. Human Technopole conducts frontier research in life sciences aimed at developing new approaches to personalized and preventive medicine, creates and manages scientific services and facilities for the national scientific community, offers training opportunities for the next generation of scientists, promotes innovation and progress through technology transfer. At full capacity, over 1,000 scientists from all over the world will work there. 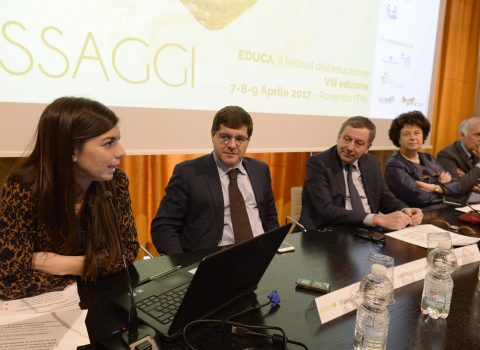