The student from Cherry Creek High School in Colorado (USA), awarded at INTEL ISEF, will be in Trentino for the FBK summer camp

He is sixteen years old and has just won a prize of 75 thousand dollars, winning the Gordon E. Moore Award at the last Intel International Science and Engineering Fair (INTEL ISEF), the largest international scientific competition for pre-college students. Krithik Ramesh, a young talent in computer engineering, will be one of the 19 participants of the next edition of WebValley, a Data Science summer camp organized by FBK for young people between 17 and 18 years old, starting on June 16 in Casez, in the Non Valley.

Krithik won the highest award in the competition – attended by over 1,800 young scientists from over 80 countries – for developing a solution that, by combining augmented reality, machine learning and computer vision, helps orthopedic surgeons achieve greater accuracy in positioning of screws during spinal surgery. There’s more: based on the tests conducted, the solution can potentially reduce operating times by at least thirty minutes, lower recovery times by four weeks and diminish the side effects associated with traditional medical imaging techniques. Starting with the 2011 edition, WebValley has opened its applications to international students, and has approached, in particular, ISEF, the top world science competition for high school students. Fondazione Bruno Kessler provides a number of scholarships reserved for ISEF finalists, who are interviewed and selected by researcher Giuseppe Jurman during the final event in the United States. During the last 12 years, the event has been sponsored by INTEL.

“Participating in the INTEL ISEF event is a truly unique experience – Jurman said -. Over the years I have met extremely brilliant young people whose projects have all the elements of a professional-level scientific research, which they can then pass on to the WebValley team during the three weeks of camp. From this point of view, Webvalley is an attempt to suggest a model of immersion in research right from high school, a well-established and institutionalized tradition in the United States, but still a novel feature in education in Italy.”

In addition to Krithik Ramesh, three other INTEL ISEF finalists, Kareen Copeland, David Yue and Ishana Shastri (in the picture to the right with Giuseppe Jurman and Krithik Ramesh), will be part of the Webvalley 2019 team.

This year’s goal for the young scientists will be to develop, alongside FBK researchers and tutors and in collaboration with the University of Milan, an artificial intelligence solution for radiomics integrated with genetic and clinical data for predictive estimation of cardiovascular risk indicators. 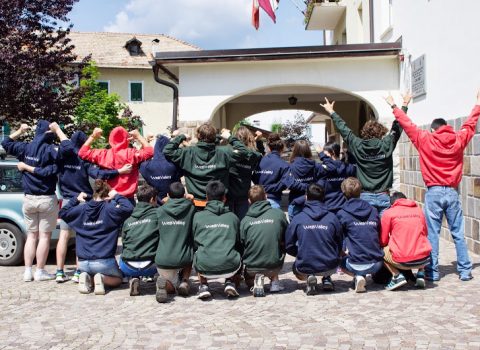