Fondazione Bruno Kessler is one of the 35 European partners participating in Humane AI, a European project conceived with the aim of developing and deploying artificial intelligence systems that, in line with the principles expressed by the European Commission, put humans at the center, enhance their capabilities and allow – individuals and society as a whole – to develop an artificial intelligence that will extend human intelligence rather than replace it.

Funded by the European Union under Horizon 2020 and started in March 2019, the project has created a European network of experts and researchers called to shape the ongoing revolution in artificial intelligence with particular focus on legality, ethics and responsibility, and to implement a large-scale European action plan and project. The socio-economic sectors potentially affected are many: industry 4.0, health and well-being, mobility, education, agriculture, politics and finance, helping Europe achieve a significant disruption in the spread of AI across all economic areas.

Last June, Humane AI partners gathered at the Sorbonne University in Paris to outline a research agenda and actions to take in order to develop a human-centered Artificial Intelligence.
The topics addressed in the four thematic workshops were: Meaning and understanding for Human AI, Interaction between AI systems and Humans, Fairness, Transparency, Interpretation and Ethical Issues, Educating for AI and AI for education. During each session, interdisciplinary groups including researchers, policy makers, ethicists and engineers, identified the key areas on which to focus research efforts and laid the foundations for the work to be done in the future.

Please see below what Marco Pistore and Bernardo Magnini, researchers at Fondazione Bruno Kessler engaged in Humane AI, said about their work in Paris. 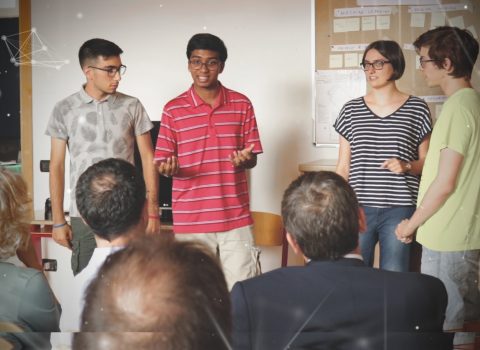