The first OECD conference on culture was held in Venice with the participation of the highest representatives of UNESCO, ICOM and the EU. Also Prof. Pierluigi Sacco attended the event

OECD Secretary General Angel Gurría said: “cultural participation, well-being and inclusive growth must go hand in hand, but targeted and adequate policies are needed for this to happen. We are on the verge of a political change”.

European Commissioner Tibor Navracsics announced a new collaboration between the EU and the OECD on the joint promotion of research and political action on culture and local development starting in 2019.

The political statements were followed by specific work sessions on three main areas of intervention:

Culture is ubiquitous in our daily lives so much that it is hard to give a definition on which everyone will agree. It is a lifestyle of a group of people – the behaviors, beliefs, values and symbols they accept, usually without thinking about it, and which are transmitted through communication and imitation from one generation to the next. It is also the accumulation of knowledge, experience, beliefs, values, attitudes, meanings, hierarchies, religion, notions of time, roles, spatial relations, concepts of the universe and material objects and goods acquired by a group of people in the course of generations through individual and group efforts.

Culture has to do with who we are and what shapes our identity. Culture contributes to poverty reduction and paves the way for inclusive and equitable human-centered development. No development can be sustainable without it.

Setting culture at the center of development policies is an essential investment in the future of the world and a precondition for successful globalization processes that take into account the principle of cultural diversity.

Culture plays an increasingly important role in the political agendas of cities and regions, either alone or as part of wider economic growth and well-being.

Where international or global perspectives place greater emphasis on the technological dimension of culture, local perspectives remind us that culture is, first of all, social capital. It reflects an identity that allows local areas to be original and to stand out.

How can tourism development be managed in a sustainable way, one that would benefit local places and people? How to avoid the problem of overcrowding of some destinations, such as Venice, Barcelona, Dubrovnik, or many other UNESCO sites?

Cities now house more than half the population of the entire planet. In a context of violence and conflict, climate change, technology revolutions, cities are key drivers for change and set themselves as incubators for social, political, economic and cultural innovations. Indeed, cities play a critical role in strengthening inclusion, diversity and creativity through the adoption of policies aimed at providing equal opportunities for all citizens.

What we have recently witnessed is a dual process of economization of culture and, at the same time, culturization of the economy.

Prof. Sacco’s talk, keynote address for the opening of the first scientific session after the official speeches of the OECD, UNESCO, ICOM and EU top representatives, has explored the link between cultural participation, welfare and local development. In other words, “culture matters, a lot. But we should not limit ourselves to considering it in its broad socio-anthropological formulation. Culture as an intentional production of meaning and content matters even more, although it is largely ignored by social sciences.”

The key point is that the real impact of culture is on behavioral change, cognitive response, emotional response. This is what generates enormous social and economic effects if properly incorporated into a (non-paternalistic) policy design.

In this regard, as noted by Jeffrey Schnapp, a key project-related problem of our time is how to transform specialist knowledge into social impact skills. With reference to museums and the possibility of inducing such profound positive changes in the widespread mental attitude, the Harvard’s MetaLab expert coined the expression “from collection to connection”, recalling the thought of Nicholas Negroponte’s: “if access to education is a human right and the internet is an integral part of education in the 21st century, access to the Internet is a human right.”

On the sidelines of the conference, the new M9 Museum of the 20th century in Mestre, hosted the opening press conference and a metaphor of production and experience of knowledge at the time of visual storytelling.
A fully interactive and multimedia museum, the beating heart of a large and profound urban regeneration, which, as often happens, relies on real estate transformation, as Nesta UK leader Geoff Mulgan pointed out.

“Without culture and the relative freedom that derives from it, society, even if it were perfect, would be a jungle.
This is why every authentic creation is actually a gift for the future”
(From: The Myth of Sisyphus, by Albert Camus,
1957 Nobel Prize laureate in Literature)

Events
Pier Luigi Sacco Is the New Director of IRVAPP. The ISIG Strategic Plan Has Been Approved
READ MORE 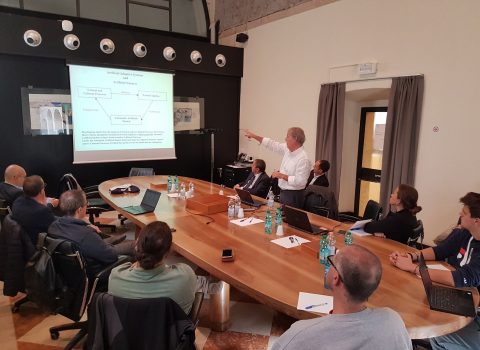