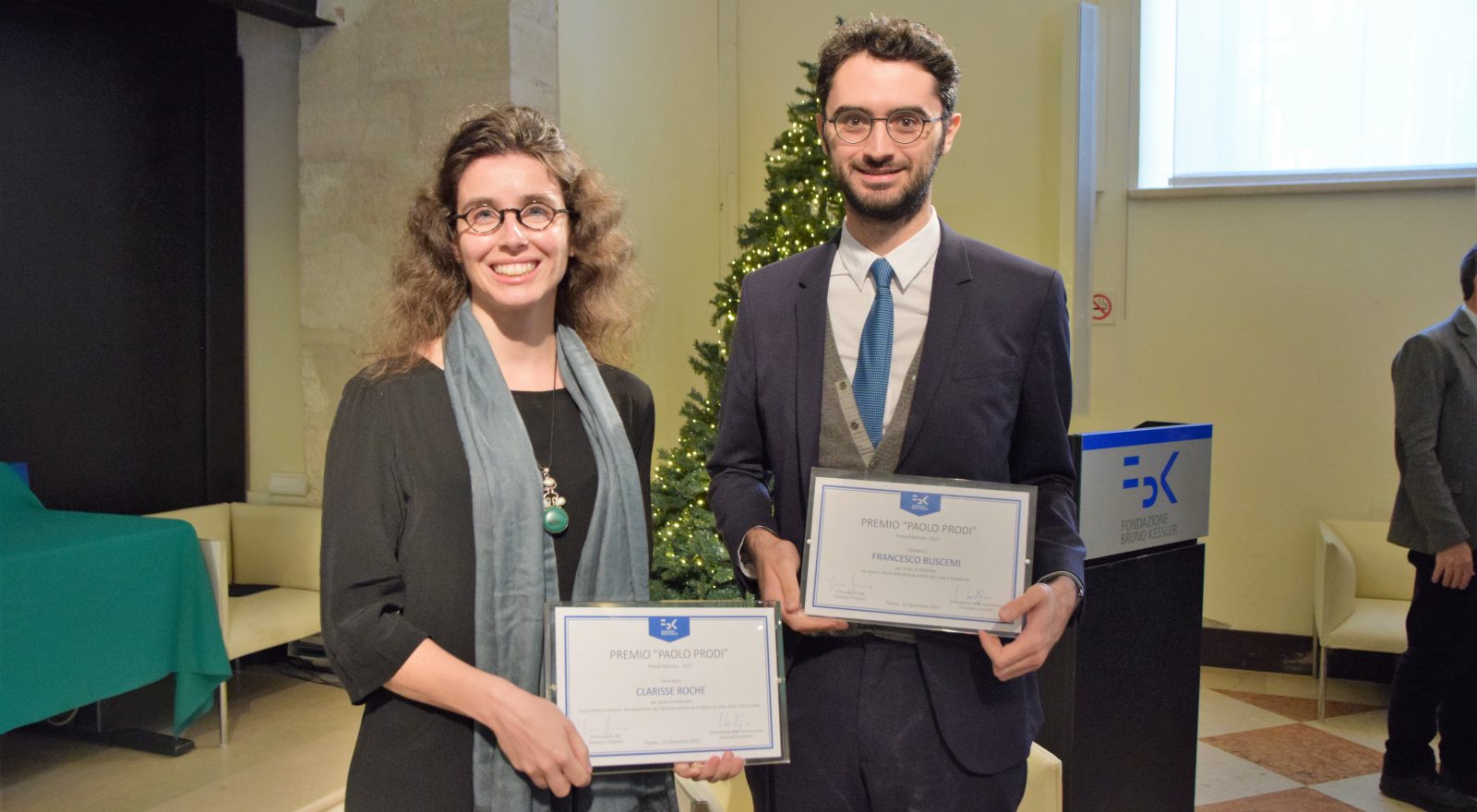 Event in memory of Paolo Prodi

Romano Prodi gave the speech "The reflection of a brother". The prize was awarded to the two best doctoral theses.

“If research has reached these levels of excellence today, we have to thank two people, Paolo Prodi and Bruno Kessler. We thought we could remember Professor Prodi in a concrete and lasting way with what we imagine he would be most pleased with: to name a research prize in his name.” These were the words of President Francesco Profumo during the end-of-year speech at Fondazione Bruno Kessler in Trento in December of last year.

Today at FBK headquarters, the initiative in honor of the founder of the Istituto Storico Italo-Germanico/Italienisch-Deutsches Historisches Institut (ISIG) and his first Director, from 1973 to 1997, Paolo Prodi was realized.

The event in his memory was attended by the president of Fondazione Bruno Kessler, Francesco Profumo, the president of the Autonomous Province of Trento, Ugo Rossi, the chancellor of the University of Trento, Paolo Collini, the director of FBK-ISIG, Christoph Cornelißen, and Romano Prodi who he gave the speech “The reflection of a brother”.

“Paolo was more than a brother”, said Romano Prodi during his speech, “he was the fifth of nine and was the only brother who worked in the humanities, so it was my point of reference”.

The late morning saw the awarding of the Paolo Prodi Prize (first edition), organized by Fondazione Bruno Kessler, in collaboration with the Autonomous Province of Trento, the University of Trento and the Paolo Prodi Study Center in Bologna.

“Through his research at ISIG, as well as through university teaching at the Faculty of Humanities”, Francesco Profumo pointed out, “Paolo Prodi has helped train generations of outstandibng students and teachers, who in turn have started new lines of research, in the name of that rigor and that free and nonconformist thought that characterized his secular spirituality. In these values ​​we recognize the highest meaning of the legacy that Paolo Prodi has left to the Italian-German Historical Institute, to Fondazione Bruno Kessler, and more generally to Trentino. And since we believe it is now also our responsibility to keep alive his teachings as a scholar and citizen of Europe, always attentive to the training of the new generations, we wanted to establish a prize in his honor – the Paolo Prodi Award – that is conferred to two young researchers who distinguished themselves for their doctoral thesis on issues dear to this great personality of culture, to which Trentino really owes a great deal”.

The recipients, awarded ex aequo for their doctoral thesis, were Francesco Buscemi and Clarisse Roche who have split the € 3,200 prize and the one-month stay at FBK-Isig to further deepen their research, and will have the possibility of having it published in the series edited by the Institute. In particular, Francesco Buscemi’s doctoral thesis “I swear”. History of political loyalty from the Enlightened to Napoleon”, carried out jointly with the Scuola Normale Superiore of Pisa and the Université Paris-Sorbonne, deals with the theme of the oath in the second modern age between political loyalty and religious loyalty. The doctoral thesis of Clarisse Roche “The uncertain frontier. Recomposition de l’identité chrétienne à Vienne au XVIe siècle (1523-1594)”, carried out between the Université Paris-Sorbonne and the Universität Wien, deals with the topic of religious conflict in the sixteenth-century Hapsburg dominions, choosing – as a privileged observatory – Vienna, bastion of the Catholic faith and the anti-Ottoman war but also residence of an imperial power forced to seek forms of compromise with the aristocracies passed to the Reformation.

The afternoon saw a moment dedicated to personal memories, entrusted to Paolo Pombeni (University of Bologna), Cecilia Nubola (FBK-ISIG), Roberto Bizzocchi (University of Pisa) and a state of scientific research with Birgit Emich (Goethe-Universität Frankfurt aM).