How Is Europe Governing Migration

Deported, rejected, detained migrants. On the Road survey to get to know the migratory paths that lead to Italy and the open challenges

This report aims to analyze and describe the main issues concerning global migratory phenomena, with a focus on Europe, through life stories, narratives and analysis of the fundamental structures of the European government of migration. These are data and materials collected over the past 7 years, of which nearly five for graduate, doctoral and postgraduate research, and two and a half years of multi-site free-lance research in the main places affected by migration in Italy: landing areas, informal camps, transit points, borders.

First of all, two professors should be thanked for this work: Prof. Marco Ventura, Director of the Center for Religious Studies of Fondazione Bruno Kessler in Trento, who offered me a research contract for a mapping of migrant religious institutions in the urban area of ​​Trento and a collaboration that is still ongoing that gives me an opportunity to analyze how religious languages ​​build discourse on borders, migration, and more general global inequalities such as access to geographic mobility. The second faculty to be thanked is prof. Pino Schirripa (Sapienza – University of Rome) Director of the Italian Ethnographic Missions in Ghana and Tigray-Ethiopia. He and the researchers who are involved in the mission have always been important sources for exchange of views and data. A tribute is given to the “Mediterranean Hope” project of the Federation of the Evangelical Churches in Italy, which, taking me to the House of Culture of Scicli, have maintained a flexible working time management that has allowed me long periods of almost pure research and knowledge of local networks engaged in work with migrants. On the other hand, for the data and insights concerning the continent, we would like to thank the collective “Campagna Welcome Taranto” and the STAMP (Support to Transiters, Reception to Migrants and Refuges) project which adopted me by the second half of April 2017, and which I now feel part of. In particular, I participated in their monitoring activities at Ventimiglia, in response to the relay called by the 20K project, which should be thanked together with Imperia’s “La talpa e l’Orologio” Social Center and the “Sconfinamenti” network.

I decided to put these materials and reflections on paper (virtual) in a place and using a language not directly linked to the academy, so that lay people as well could read it. This choice does not appeal to anti-academicism, which is likely to be ultimately populist, rhetorical and dangerous: this material has been and will be the obbject of scientific publications. The choice is motivated by a moral ethical criterion: facts and analyses of this column address something that is happening while we are writing; the long time required for scientific publishing would not allow us to respond to the urgency and moral imperative of witnessing and taking the word publicly of those who produce scholarship and knowledge. I keep the anthropology derived method based on ethnographic research and look to connect the levels of day-to-day life and big global issues, the actions of individuals in relation to the systems that structure the field of action of individuals.

The booklet will be released in a number of “episodes” that will make up a non-linear, but instead fragmented story, as only narratives related to migration can be. However, without this fragmentation, the first thematic block will be quite consistent and will tell the construction of a French border that, through deportations of migrants, extends to Taranto by building a confined space with variable geometry.

The “European Migration Government” column is organized by OSVALDO COSTANTINI, an associate researcher at the Center for Religious Sciences of the Bruno Kessler Foundation, which is involved in the lifestyle and conflicts research lines. Within this interest moves between scientific publications and public press releases, especially in relation to those aspects of the #migration more closely related to the imaginations, the desires, and the related frustrations and disillusionments that move the actions of these new “damned of the earth”.
Next ARTICLES: 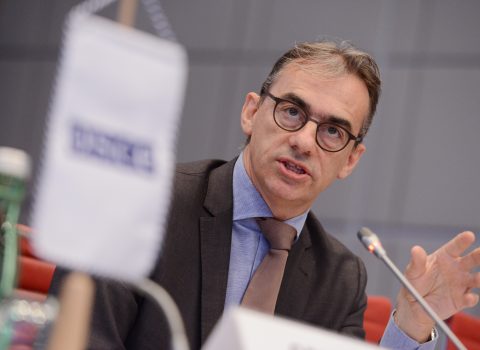